The parades early Monday morning, with people decked out in red, white and blue, will be parades of runners on the streets in Greensboro and Kernersville.

The Freedom Run 10K and 5K, which began in 1977 and is the Triad's longest-running road race, will get the Fourth of July morning started in Greensboro. Downtown Greensboro Inc., the race owner, uses the event to open its Freedom Fest celebration.

And in Forsyth County, the Rotary Club of Kernersville will host its 27th annual road race.

More than 435 runners are signed up for the Freedom Run races, with 200-plus entered in Kernersville. Both races offer signups at packet pickup on Sunday and on site Monday morning.

The Freedom Run, part of Junction 311 Endurance Sports' Omega Sports Race Series, went virtual in 2020 and shifted to a course in 2021 that shows off Elm Street, Irving Park and Center City Park.

"It is really well-loved by everyone," Junction 311's Nikki Popovich says of the Freedom Run. "You see a lot of cool areas, you go through Irving Park. And then it's just a nice finish when you come down because you're right in Center City Park, which now has grown up so much with LeBauer Park. There's so much to see. There are so many activities for the kids. It really is so much more of a family affair. And then it rolls right into the festival itself."

Mike Clark, who owns Junction 311 with his wife, Elaine, says Freedom Run participation levels aren't "completely back" to pre-pandemic levels of 2019 but are close.

"If you haven't (raced) for a little while, you forget the coolness of the adrenaline," Popovich says. "It's more than just the medal. People say, 'I can lace up and run for free any day.' And that is absolutely true. But there is something different about being there for the experience, getting that official time, the celebration afterward. You can have a great run, but all you're doing is posting on social media if it's just you by yourself."

Memories are long, and in a good way, for veterans of the Freedom Run. But they're also important for Popovich and Clark, whose involvement with the race has developed in recent years.

"It's the sense of community. When it's a holiday, people are choosing to be where they are. People are willing to wear red, white and blue. You'll see soldiers dressed up. To see children out. This year we have a woman (High Point's Bea Ragaz), and her daughter is pushing her in a wheelchair, so she'll be the oldest finisher."

Clark has seen the race from a runner's perspective but also as a race director.

"Kind of two different ones," he says of his top memories. "One back before we managed it and I was actually running. It was a cool thing to do but one of those race director nightmare things: The year had the water main break on Elm. It was a 6.4-mile race that year.

"Then actually last year when I timed it personally. We've been timing it as a company for several years. But I've gotten into doing more and more timing as Nikki and Johanna (Bingham) and some of the other team have taken over more and more duties. Just being the timer of it; that was really cool and fun."

Allegacy is sponsoring the Fun Fourth Freedom Fest, and Junction 311 is partnering with not only Omega Sports but Atrium Health Wake Forest Baptist.

What you need to know about racing on the Fourth of July in the Triad: 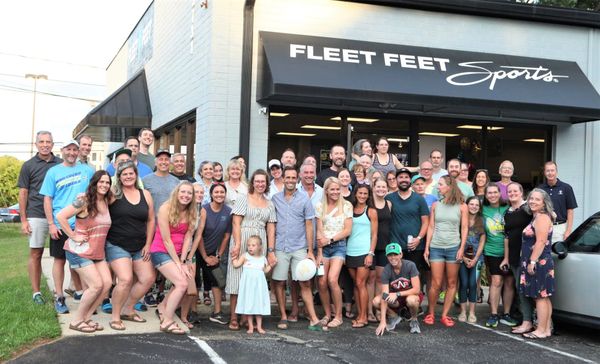 A listing of road and trail races, plus a few triathlons, across the Triad.

A directory of running groups across the Triad that are free to join and would welcome you.